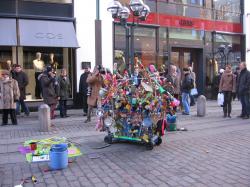 The shops of household appliances in Finland.

Shop “CruzBroker” specializes in computer technology. “CruzBroker” is characterized with the latest computer innovations, fast and professional service and the wide range of special offers.

In addition, the shop “CruzBroker” provides quick preventive and repair service. There is also a point for wholesale Internet service Beesting.fi in“CruzBroker”, with the help of which you can order about 70 000 items at affordable prices.

Shops “CruzBroker” are located in Finland in Kuopio and Lappeenranta.

The largest network of electronics stores in Finland “Giganti” will offer you decent range of household appliances and electrical goods from well-known producers.
There are various household appliances, photo, video and audio equipment, computers and office equipment, navigation devices, mobile phones and other goods at competitive prices in the assortment of “Giganti”.

There are electronics for leisure in “Musta Porssi Jatti” (TVs and home theaters, audio systems and music centers, player Blue-Raw, media players and DVD, amplifiers and acoustics) and household appliances to help around the house (washing machines, dishwashers, vacuum cleaners and dryers, food processors and juicers, coffee makers and kettles, electric appliances for health and beauty), and office equipment (computers and their accessories, printers, laptops), and digital equipment (cameras, photo and video cameras and their accessories) as well as navigators and mobile phones.

“Tietoasema” is a world of computer technology. There are computers and accessories, printers, external devices, software and accessories in the assortment of this shop.
Shops “Tietoasema” are located in Finland in the following cities: Helsinki, Jyväskylä, Lahti, Mikkeli, Salo, Seinäjoki, Tampere, Turku.

The assortment of goods in the department store “Biltema” is limited in technical direction.There are the choice of different goods for leisure and hobbies, office supplies, household goods, goods for construction and repair, various tools as well as goods for automobiles and boats.

The history of this store began in 1918 in Sweden. The first suchlike center in Finland was opened not so ago - in November 2002.
You’ll find the wide variety of technical goods in “Clas Ohlson”: computer accessories, photo, video, audio equipment, office supplies and stationery, tools and appliances, household stuff, etc.